In the cultural history of Sakizaya people, the Takubuan Incident (aka the Kaliwan Incident) in 1878 is the most influential. It is reflected in the color of people’s costumes and the Ritual for Fire God. In addition to remembering ancestors and the significance of the historical event, it also helps to enhance people’s sense of unity and identity. The current Sakizaya population is 861 (until March 2016).

In the legend of Sakizaya, their ancestors migrated from overseas and landed on Hualien Plain in the east of Taiwan. In the Dutch and Spanish archives of the seventeenth century, Sakizaya people were already recorded. At the end of the nineteenth century, the Qing Government actively developed the east and the mountains of Taiwan. After they settled on the plain of Hualien, Qing officers and soldiers were brutal and unfair to them; the life of every indigenous people was harrssed and disturbed seriously, causing the Sakizaya and the Kavalan to unite in resistance. In 1878, an anti-Qing rebellion called the ‘Takoboan Incident’ (Kaliwan Incident) took place. This incident caused great casualty among Sakizaya people; the villages were dispersed; and their language and cultures were hidden away for almost a century. This had a big impact upon the traditional culture of the Sakizaya. Due to the impact from the incident, Sakizaya people were dispersed. They migrated and kept silent for over a century. During this time, they lived among Amis people and interacted closely with the Amis, gradually found it hard to keep their own culture.
During the Japanese Occupation Period in the twentieth century, anthropologists regarded Sakizaya society and culture as part of Amis culture. At the end of the twentieth century, Sakizaya people reclaimed their own culture and customs from the history, and presented their knowledge through ethnic costumes and the Ritual for Fire God. They also started the movement of promoting ethnic awareness. In 2007, they became one of the officially recognized indigenous peoples in Taiwan.
The Sakizaya mainly live on Hualien Plain. After the Kaliwan Incident and the change of ruling powers, they moved around on Hualien Plain and started to build settlements in East Rift Valley and the coast. Nowadays, large Sakizaya villages include Beipu in Xincheng Township (Hupu’), Guofu Li in Hualien City (Kasyusyuan), Guofu Community (Cupu’), Meilun (Pazik), Saguer (Sakul), Maliyun in Ruisui (Maibul), Yuemei in Shoufong Township (’Apalu), Shanxing in Fenglin Township (Cilakayan), Shueilian in Shoufong Township (Ciwidian) and Jiqi in Fengbin Township (Kaluluan). In recent years, due to the economic development of the entire society, quite a few number of Sakizaya people have moved to Taipei metropolis.

The Sakizaya society practices matrilineal marriage and age rank. Matrilineal marriage sustains family relation, while age rank connects man-to-man relations in the society. During the Japanese Occupation Period, there were changes in one’s marriage partners. The number of mixed marriage with the Amis increased. In recent years, as the contact with Han Chinese became more and more intense, mixed marriage with Han Chinese also increased.
1. Matrilineal Society
The early Sakizaya marriage was dictated by matrilineal mechanism. Before marriage, the groom must prepare firewood for the bride’s family. With consent from parents of both sides, the groom can move in to live with the bride and her family. Before the Japanese came in the twentieth century, the Sakizaya mainly followed endogamy. During the Japanese rule, more and more Sakizaya people were married with the Amis. After the 1980s, the entire society and economy changed. Sakizaya people had more contact with other ethnic groups, and the number of mixed marriage with Han Chinese also increased.
2. Age Rank
Sakizaya men are divided by age into children, youth, adult and elder. After they become the members of the rank of youth, they have to take public responsibilities such as defense, industry and labor. Besides, they also play important roles in all rituals and ceremonies.
Boys before the age of fifteen are called children, ‘wawa’. After the age of thirteen, they enter the preparation stage for youth and are about to become members of the age rank. They have to participate in the training sessions especially for the minors. For example, they start to live in the youth’s house and take orders and training instructions from their seniors.
After boys become members of the age rank, they gradually rise on a scale of nine or twelve ranks. The promotion is decided by the chief, elders and youth cadre members, and to be confirmed after worshiping God of Creation Malataw. The names of Sakizaya male age rank are repeated. Currently the villages of Sakul, Maibul, Kaluluan and Ciwidian still practice age rank. The Sakizaya age rank covers eight years in one rank from the age of thirteen up to the age of seventy-seven or more; every rank has its own name and meaning. Take the age rank in Ciwidian for example; the names of their age rank are as followed: 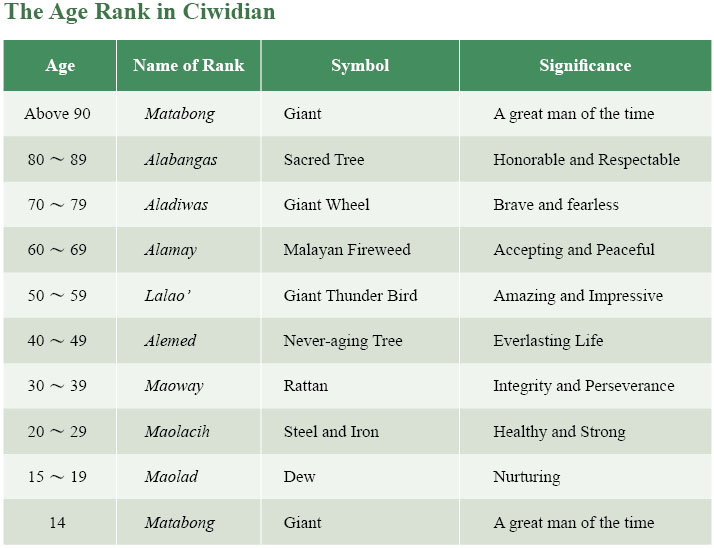 Sakizaya people believe in pantheism; supernatural powers exist everywhere. Communication with the supernatural powers must be done by mapalaway who also knows how to communicate with gods and spirits. In tradition, gods and spirits are divided into the God of Creation (Malataw), God of Protection (Dungi’), Ancestral Spirits (Ditu nu babalaki) and the Spirits of Nature (Ditu). Each god has its duties and demands different worshipping rituals. In recent years, as Sakizaya people came into contact with other ethnic groups and belief systems, some people also follow Chinese and Christian religions.
The Sakizaya traditional concept of gods and spirits has impact on the life and health of the people. They develop agriculture-related rituals such as Sowing Ritual, Crop Ritual, Harvest Festival, Garnering Ritual, Rain-Praying Ritual and the rituals for the God of River and the God of Sea. These rituals take place according to Sakizaya people’s understanding of four seasons: spring (pasavaan), summer (ralud), autumn (sadinsing), and winter (kasinawan). The Sowing Ritual takes place after the Chinese New Year between February and March on the lunar calendar. The Ritual for the God of Sea takes place between May and June on the lunar calendar. The Harvest Festival takes place after the crops in August on the lunar calendar. Lastly, the Garnering Ritual takes place at the end of the year. These agricultural rituals have been simplified due to the changes of the society and environment. Nowadays the Sakizaya celebrate the Harvest Festival regularly.
1. Agricultural Rituals
Traditional Sakizaya rituals center on the millet. Therefore, the Sowing Ritual, Harvest Ritual and Garnering Ritual are all developed to accord with the life cycle of the millet. As the cash crop and food production change from millet to paddy rice, these rituals surrounding the cultivation of millet have also been adjusted to go with the cultivation of paddy rice.
◎The Sowing Ritual (mitiway a lisin)
It takes place between February and March under the leadership of the ritual convener cilisinay. In the Ritual, primary activities include sowing and worshipping God of Creation Mapalaway. After sowing, men go to catch fish and share the fish later. After their meal, every family prepares millet or game for the convener of the Ritual to express appreciation and satisfaction. Now, Sakizaya people have not held the Sowing Ritual for quite some time.
◎The Harvest Festival (kailisinan)
The Harvest Festival takes place after the cropping of millet. As the millet is being reaped, Sakizaya people weave the leaves of Formosan sugar palm trees to tie millet tassels and prepare sticky rice cake, wine and betel nuts to place them at the door. The priest Mapalaway share these offerings with families that have lost a member to injury or death in the year; this is called ‘patongi’’. After the ‘patongi’’, they have ‘malaliki’’. People in formal attire follow the chief to worship and thank the God of Creation Malataw for his protection and blessings of the harvest. At the end of the Festival, there is a feast ‘paklang’, in which people go fishing, and enjoy the catch with sticky rice together.
◎The Garnering Ritual (musinga’)
After the reaping of millet or dry rice, every family decides the time of garnering the harvest in the afternoon. After the crop is put in the granary, people must make sticky rice balls (tunu’ in the Sakizaya language) to worship the God of Crops.
◎The Ritual for the God of Sea (mila’dis)
It takes place between May and June on the lunar calendar and is presided over by the chief. People worship the God of Creation as the God of Sun Malataw and God of River and Sea Kavit.
When to hold the Ritual is traditionally decided by the climate. At present, it is decided according to Gregorian calendar. People worship the God of Sea Kavit with millet mochi, rice wine, tobacco and betel nuts. After the worship, they must go to the sea to catch fish. It also marks the beginning of the fishing season. The Ritual of the God of Sea is still practiced in the village of Kaluluan.
2. The Ritual for the God of Fire
The Ritual of the God of Fire revolves around the Kaliwan Incident; it is a cross-village event of remembrance and commemoration.
During the Kaliwan Incident, the village of Takubuan was the largest village. Thorn bamboos were planted on the outskirts of the village. The soldiers of the Qing government were prevented from entering the village by these thorn bamboos, so they launched fire arrows to attack, which resulted in the burning of thatched houses and the casualty of the villagers. After that, Sakizaya people were dispersed all over the place and could not worship their deceased ancestors in rituals.
This incident swallowed the Sakizaya in history and set back the development of Sakizaya culture. After a century, the Sakizaya used the Ritual for the God of Fire to remember the chief couple and fellow people who were sacrificed in the Kaliwan Incident. In addition to historical significance, the Ritual for the God of Fire also helps to unite the people and develop their ethnic consciousness.
The Ritual for the God of Fire is divided into the following stages: Welcome Gods, Pray for Blessings, Procession, Worship Gods and Send Gods Away.
◎Welcome Gods (Di’tu)
To ‘Welcome’ is to notify gods and ancestral spirits with smoke. After the smoke ceremony, Five-color messengers walk around the Takubuan village with torches and arrive at a specific spot to invite ancestral spirits to the ritual site. After ancestral spirits enter the site, the God of Fire will be welcome to the site.
◎Pray for Blessings (milunguc)
The priest and Five-color messengers separate themselves and stand in six different places in the ritual site. They walk around the people and perform the ceremony of driving away disasters and praying for blessings. 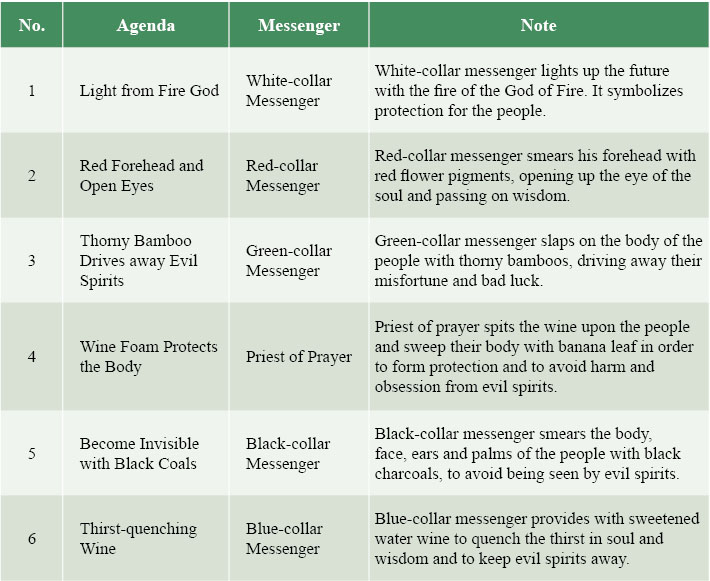 ◎Procession (misaliyuk)
Members of the youth rank will go on a procession along the escape rout of the survivors of the Kaliawan Incident. In the ritual site, people will sing ‘Summon Dance u-u-u’, ‘Song of Welcome’ and ‘Warrior Dance in Harvest Ritual’. Among these songs, the ‘Summon Dance u-u-u’ is regarded as the principal song of worship in the Ritual for the God of Fire (palamal).
◎Worship Gods (mibetik)
People sing ‘Worship God u-u-u’ and worship gods with betel nuts, betel peppers, sticky rice cakes, millet, ginger wine, thorn bamboos and salt. They use windmill, smoke, top, clay potter and clay cup to transfer their prayers to heaven, earth and ancestral spirits. After the end of the ceremony, people will burn the altar for the Fire God.
◎Send Gods Away (padungus tu Di’u)
The Sakizaya chief priest presides over the ritual and expresses on behalf of the people. The chief priest, the messengers of the God of Fire and the chief leads the people to sing the ritual songs and walk around the altar.