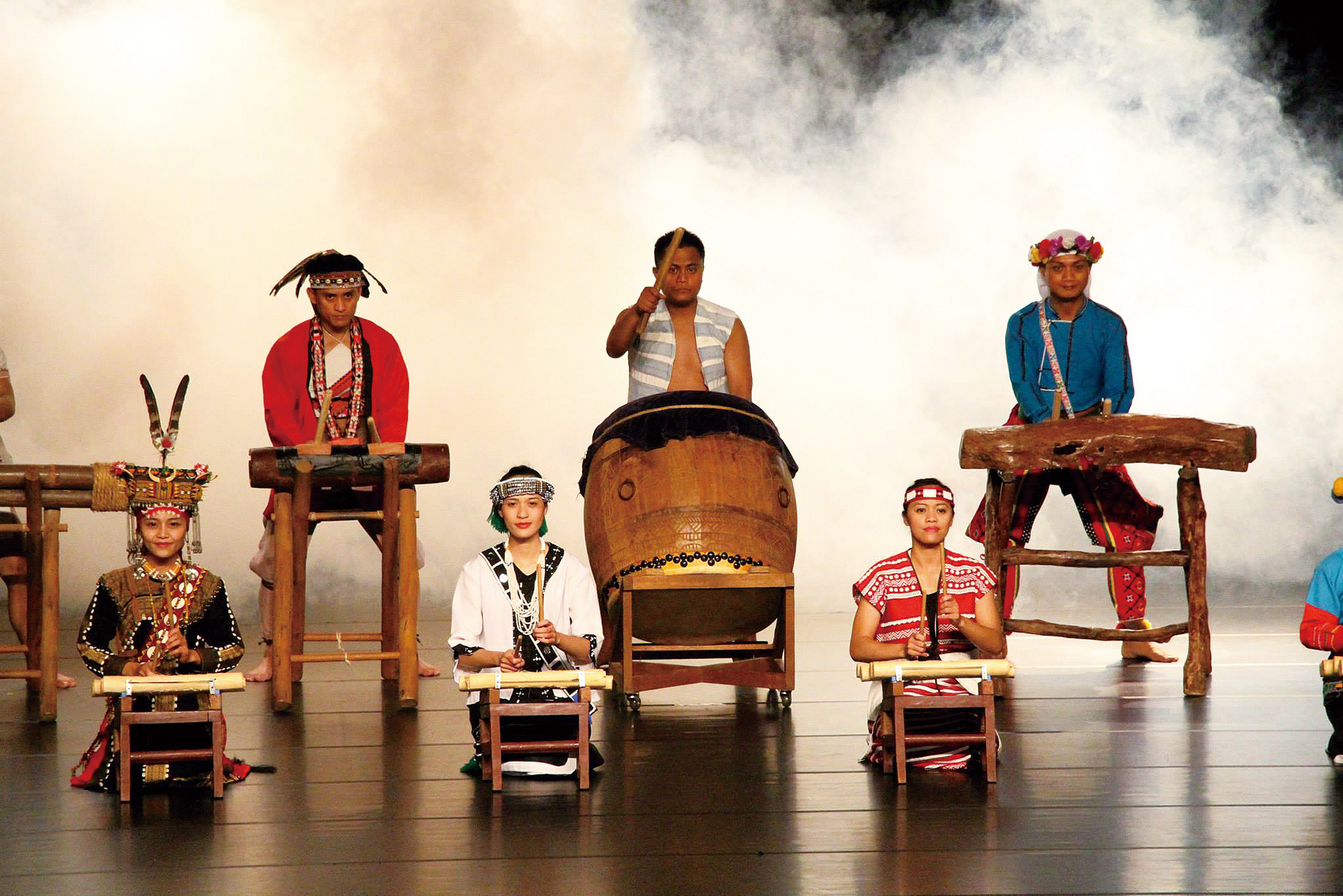 “Between Earth and Sky: Indigenous Contemporary Art from Taiwan”
Presented at the Queensland Art Gallery | Gallery of Modern Art (QAGOMA), in Brisbane, Australia,
from 4 December, 2021 until 25 April, 2022.

Between Earth and Sky: Indigenous Contemporary Art from Taiwan explores land, ecology and cosmology through a cross-generational selection of artists working in painting, sculpture, textiles, ceramics, installation and performance. With cultural, linguistic and ancestral links across the Austronesian world, Taiwan’s indigenous peoples have called the island home for millennia, arriving well before the first Han migrations at the end of the seventeenth century. Dispossession and forced assimilation at the hands of successive colonial regimes have resulted in the loss of language, land and culture.

Taiwan is the mother-island of Austronesian. Taiwanese indigenous artworks are embedded with distinctive elements of ancient myths, lands and environs, religious rituals, cultural symbols, and ethnic identification. Through this exhibition and subsequent interpretations, the artists express the contemporary time-and-space axis between individual people, as well as between humanity and nature.

The eight participating artists of Between Earth and Sky: Indigenous Contemporary Art From Taiwan at APT10 come from various generations and ethnic groups, and by using diverse materials and integrating their own languages and myths, they re-interpret their views on contemporary cosmology and ecology. Of these artists, Yuma Taru and Ruby Swana were commissioned to produce new works for inclusion in APT10, while the other artists present recent works.
Curatorial Theme: Between Earth and Sky
The curatorial theme of the exhibition is the origins of indigenous mythology, with the eight participating artists addressing indigenous myths, tribal traditions, clay pot culture, totemic ornamentation, together with the contemporary issues of gender and faith. This showcases the way in which works by modern indigenous artists combine cultural and historical narrative symbols and the contemporary style created when these collide with social issues.
The three female artists, Aluaiy Kaumakan, Yuma Taru, Ruby Swana, explore contemporary messages of their own land, culture, language, myth and the origin of life by way of the textile weaving process of fiber art.

The Eight Participating Artists
The basic tone of Aluaiy Kaumakan’s soft sculpture weaving installation Find a Settlement (2021) is that of a female self-narrative. The piece relates the endlessness and ignorance inherent in a journey of self-discovery, finding a place to rest and reflect on how to restore the close relationship between humanity and nature.

Yuma Taru is designated a “conservator of traditional arts” by the government and is actively involved in the preservation of Atayal fabric work and related research. The Spiral of Life Series - The Tongue of the Cloth (yan pala na hmali) - A Mutual Dialogue (2021) was commissioned by the “10th Asia Pacific Triennial of Contemporary Art.” The revolving installation represents wisdom and language, while there is also a gap in the rotating circle to facilitate the possibility of exchange between people.

Ruby Swana’s work Dancer of Light (2021) relates how in Amis mythology the goddess of the ocean “Tiyamacan” uses her wisdom to save members of the tribe and conveys longing through lightning and the glistening light of ocean waves. The work uses mixed media material, a light source and the effects of photo-permeability, reflection, refraction and mapping, to create a spiritual space made up of virtuality and reality.

Young artists Dondon Hounwn and Fangas Nayaw use video art to document and criticize the scars caused by colonization and modernization, as well as to reflect and recall the ethnic traditions.

Dondon Hounwn shows three video installations 3M-MLUQIH Wound (2018), 3M-MHADA Maturity (2018) and 3M-MSPING Adornment (2018). In the Truku language “M” represents something in the process of happening. In this context, 3M indicates a subject on which three artists are reflecting. 3M-MLUQIH Wound looks at the contradiction inherent in the co-existence of traditional religious ceremonies and Christian churches in tribal communities; In contrast, 3M-MHADA Maturity relates how the artists reflect on the issue of how to view plains indigenous peoples through exchanges with the plains indigenous peoples of Hsiaolin Village in Kaohsiung; 3M-MSPING Adornment uses the male body and clothing to showcase conciliatory feminine expression and through gender boundaries point out the changing values of the tribe.

The work of Fangas Nayaw spans the fields of video, drama and dance, with a focus on how to sustain and pass on tribal traditions to the younger generation given the impact of globalization on modern society. The four channel video work La XXX Punk (2021) turns a theater into a video installation and uses the futurism of indigenous punk to create a parallel time and space in which indigenous peoples have disappeared. This utilizes a counterfactual model to reconstruct the music and dance culture of the Amis peoples, discusses how Amis society traditionally apportions responsibilities based on age and asks how one should respond to this.

Ceramic artist, Masisiwagger Zingrur, expresses the concept of the ancient Taiwanese indigenous totems being also one kind of linguistic interface; that is, through rituals, relationship connections and sacredness are created. Meanwhile, the artworks of the two graphic visual artists, Etan Pavavalung and Anli Genu, also illustrate contemporary issues in relation to ethnic life imprints, myths, and ecological reflections.

Masiswagger Zingrur has researched ancient Paiwan clay pots for nearly 20 years and presents a clay pot installation that is critical of the way in which modern cultural systems seek to excise traditional handicrafts and culture. The installation piece which is made up of The Mother of Conception (2021) and Dialogue．Token (2021), uses a completed clay pot and volcanic rock to lay a path with a dozen or so patterned ceramic pieces that alludes to the unknown nature of cultural fate.
Etan Pavavalung’s work Children of the Land and the Sun (2009) uses 12 paintings of myths about the origins of the Paiwan tribe; The Wind Blows Between Heaven and Earth (2021) is the latest addition to Etan’s “Vecik” series. There is a popular saying in Paiwan mythology: “The stars in heaven are incarnations of Lilies on earth,” and the detailed hand carved patterns of this piece are akin to the trajectory of the wind, connecting the messages of lilies and stars between Heaven and Earth.
Anli Genu displays the five-piece work Music of Hunters (2006-2009), which transforms the movements of Atayal hunters into dance moves, in a way that highlights their joy of live and respect for deities, heaven, earth and the soil; the four-piece oil painting Wave My Face (2021), shows portraits of tribal elders and through the dying out tradition of tattoo culture records the life of the Atayal.

We are in urgent need of constructing a new relationship, both friendly and piously. On the boundary lines of language and myth, we need to learn the philosophy of both looking forward and backward, and in so doing, we will realize the divine enlightenment of the wind blowing between heaven and earth in a natural way.